Hello, and welcome to WhoHaha’s Comedy Call Out Winter 2020! This is a quarterly announcement where we shout out a group of WhoHaha creators who have put in the work and made amazing comedy! Do you know one of these creators? Because you should! 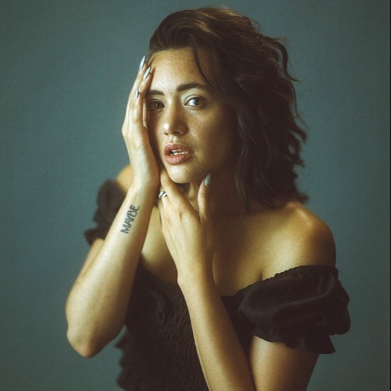 Rivkah Reyes is a Chicago-born/LA-based actor, musician, comedian, producer, and writer who has stolen our hearts! They started their performing journey early and began guitar at the age of 4. In the 4th grade, Rivkah performed on the NPR show From the Top, which eventually led to them being discovered and cast in the 2003 film School of Rock. Since their movie debut, Rivkah has been a prominent force in Chicago’s music and theater scenes. They have worked with The Second City in Chicago on several sketch revues and has performed improv, sketch, and stand-up at iO, The Hollywood Improv, The Laugh Factory, Club Cumming and Las Culturistas’ I Don’t Think So Honey! Live. Rivkah is an alum of the prestigious School at Steppenwolf, The Second City and iO’s training centers, and the University of Illinois at Chicago. They are a bicoastal, bipolar, biracial, bisexual Leo with an Aries moon and a Libra rising, but they doesn’t like labels. We absolutely love them and you will too! 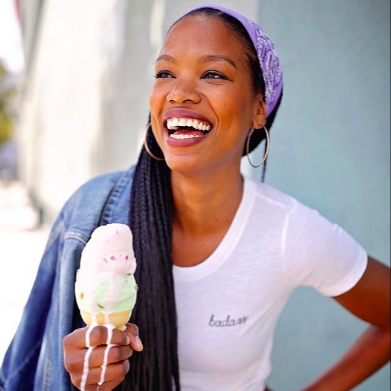 Shukri R. Abdi is a dynamite LA-based actor, writer, and TV producer. Her writing credits include Kevin Can F*** Himself (AMC) and Black Card Revoked (BET), and her acting credits include United We Fall (ABC), and Adam Ruin’s Everything (truTV-CollegeHumor). In 2019, Shukri was named a New Face of Comedy at the Just For Laughs Comedy Festival in Montreal, and performed in their characters showcase. Shukri was also a cast member and writer in one of Los Angeles’ prestigious programs, the 2019 CBS Showcase, and returned as a staff writer for their 2020 Showcase. Shukri dazzles the LA comedy scene performing sketch at the Upright Citizens Brigade with Donatella on Maude Night, and is a frequent guest on Baby Wants Candy’s musical improv podcast. Shukri starred in Lissete Shuster’s short, Singlezilla, and is the lead in Honora Talbott’s forthcoming film, GenXX. We are so glad she is a WhoHaha Creator and we can’t wait for you to see more of her! 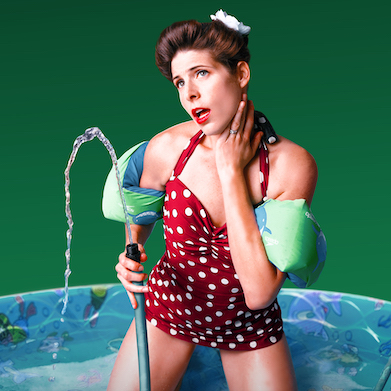 Nicole Blaine is a writer, producer, and stand-up comedian. Nicole’s first stand-up special with Comedy Dynamics, Life’s A Bit, will be available March 31, 2020 on Amazon, iTunes, Google Play, and a variety of cable outlets. She is thrilled to embark on a midwest tour this summer for Scary Mommy Live, and you can catch her on the upcoming season 3 of Laugh After Dark on Amazon Prime. Since 2013 Nicole has been the Executive Producer and Festival Director of The Stand Up Showdown at The Westside Comedy Theater. In addition to The Showdown’s stand up competition, Nicole hosts free Industry Panels that are open to the public with panelists from HBO, NBCUniversal, Comedy Central, JFL, Disney Fox, Disney ABC, TBS, Lionsgate, Sony, and much more. Check out WhoHaha on the upcoming panel with Comedy Dynamics and All Things Comedy on April 10, 2020! Nicole and her producing partner/husband/assistant, Mickey Blaine, executive-produced and directed the stand-up special, Burning the Light, which debuted on HBO in 2016. You can see Nicole perform every Monday night at the Kibitz Comedy Show at Canter’s Deli in Los Angeles or swing by the Women’s Open Mic she hosts monthly at The Westside Comedy Theater. She lives in Santa Monica with her husband and two kids. They all suck so she has great material. www.NicoleBlaine.com. 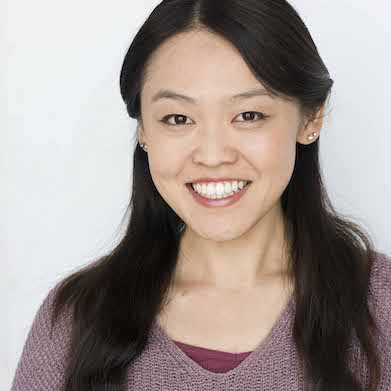 Marie Cheng is a WhoHaha all-star and currently a staff writer on Disney Channel’s live-action family comedy Just Roll With It. She previously wrote for Dreamworks Animation TV, Oddbot Inc., Nickelodeon Animation, and developed a live-action project for Snapchat. Her live-action dramedy pilot, Wildflowers, was one of 13 half-hour scripts selected for the 2018 New York Television Festival, a Second Rounder in the MACRO Episodic Story Lab, and a Top 3 Script on the Bitch List 2019. Her adult-animated comedy about the Grudge girl joining a sorority, Everybody Screams At Me was also recognized as a HUMANITAS New Voices Program Finalist. She has previously written sketch comedy at IO West, UCB in LA, and was a participant in the WhoHaha Spring Creator Lab for her unscripted game show format Making Ugly Things Cute. We are proud of Marie Cheng and know you will be too! 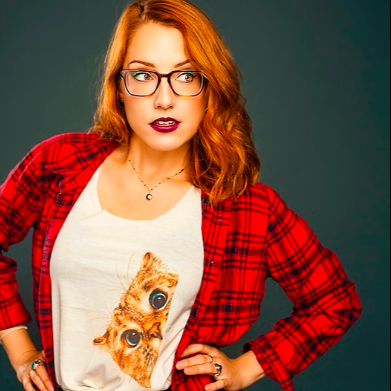 Valerie Tosi is a superstar comedian, actor, writer, and voiceover artist. Her recent credits include performing stand-up on Conan, guest-starring on IFC’s Stan Against Evil, being featured on Netflix’s The Joel McHale Show, and performing as the lead in the feature film The Sex Addict. She currently features for Dana Gould on the road and has headlined and featured at several comedy festivals including 208, Limestone, Laughing Skull, Out of Bounds, All Jane, Bird City, and so many more. Valerie also contributes to the community by hosting The Mermaid Comedy Hour! Mermaid Comedy Hour is the longest-running all-female show at The Hollywood Improv. Valerie is alumni of both The Second City & iO West! Her improv background led to several Buzzfeed videos garnering millions of views including a video with Kevin Hart & Ice Cube. You may have heard her voice literally everywhere as the voice of the Google Home Mini campaign. We are ecstatic about her and know you will be too! 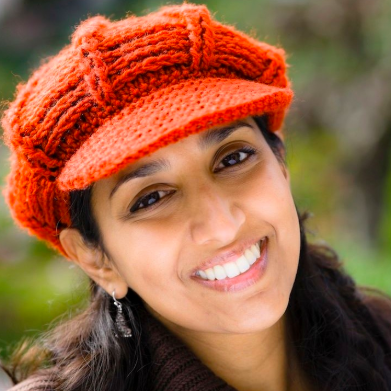 Dhaya Lakshminarayanan is the 2016 winner of the Liz Carpenter Political Humor Award (previously awarded to Samantha Bee and Wanda Sykes). She is known internationally, performing in Shanghai, Kuala Lumpur, and Singapore. Comedy Central Asia crowning her as the Grand Prize Winner of The Ultimate Comedy Challenge. She hosted a series of live events for a travel brand, AFAR, where she worked with Sally Kohn, Peggy Orenstein, and Francis Lam. She has opened/featured for or worked with the following: Janeane Garofalo, Marc Maron, Greg Behrendt, Jello Biafra, the late Dick Gregory, Anthony Jeselnik, Maz Jobrani, and Greg Proops. She is a frequent comedic storyteller on NPR’s Snap Judgment and has appeared live in Austin on The Risk podcast. She is the current host of The Moth in San Francisco and has been a Grand Slam participant and a featured Moth podcast storyteller. She hosted the premier year of the Emmy award-winning series High School Quiz Show on PBS’s WGBH. She is a big nerd and has a background in science/engineering from MIT and worked in the finance industry before they kicked her out for too many “excel spreadsheet” jokes. We think she’s the bee’s knees and know you will too! 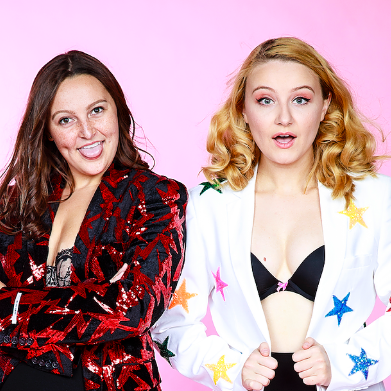 Not Spicy Enough is a non-stop fun sketch comedy duo featuring Cece Lucero-Trask and Tuesday Grant. They focus on parodying pop-culture and release a new video every single Wednesday on Youtube. Cece Lucero-Trask and Tuesday Grant met at the University of Southern California while participating in the sketch comedy troupe, The Suspenders. Cece Lucero-Trask grew up in a large Mexican-American family where she figured out she had to be funny to get noticed and has loved to make people laugh ever since! Tuesday Grant grew up in the armpit of Florida and used her comedy as a way to escape the swamp. Cece and Tuesday have both taken sketch writing and improv classes at UCB, The Groundlings, and Second City, as well as directed and produced an original sketch show at Second City Hollywood. Between the two of them, they’ve written over 500 sketches. They will also be producing and performing in a show in the Hollywood Fringe Festival this June. WhoHaha has featured many of their sketches and we are excited to feature them now! 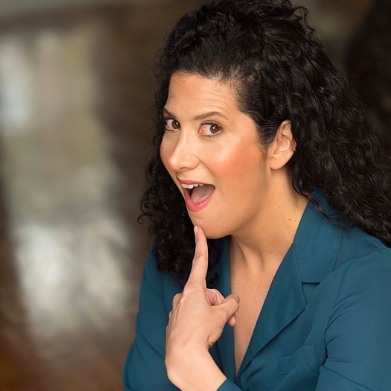 Meet Amanda Marks! Not your typical anything, Amanda Marks, can turn the minuscule or mundane into a monumentally funny shtick. She is a quirky and endearing comedian, content creator, actress, and super (tired) mom. Amanda performs stand-up comedy, emcees events throughout the country and produces comedy shows. She has opened for comedian Judy Gold and has performed at such venues as the Stardome, Zanie’s Nashville, Stand Up Live and the Comedy Zone. When she’s not performing live, she and her sister Alison host the award-winning Sis & Tell podcast recently featured in Forbes. Amanda’s comedy is like your favorite bbq brisket, both inexplicably Southern and Jewish. We are excited to introduce her! 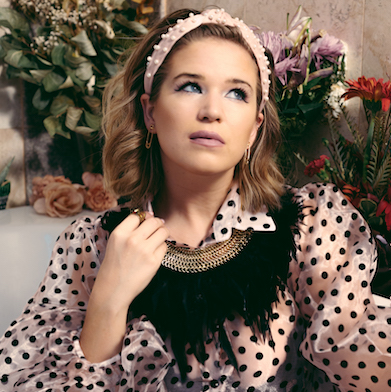 Originally from Philadelphia, Leah Knauer is an LA-based actor, writer, improviser, and co-host of the Basic Witches podcast at The Comedy Store. You can see her in Pink Series Ahead (premiering in 2020), Jay and Silent Bob Reboot, and co-starring on Comedy Central’s Corporate and Not Safe with Nikki Glaser. She is a castmember of the all-female musical improv powerhouse team Adele Dazeem at Upright Citizen’s Brigade. Leah was recently featured in Forbes and has regularly appeared in videos for BuzzFeed, Clevver, and Refinery29. She was a writer for Fullscreen’s Live from Hell with Adolf Hitler, and before that, she was a writer for DirecTV’s comedy sports late-night talk show Fair Game with Brock Everett and was named one of “The Funniest Women on Twitter” by SMOSH. Leah is the head writer of the sexual assault prevention show The C-Word: Consent, which started touring colleges across the country in Summer 2017. Most recently, she was a cast member and writer for Wayne Brady’s musical improv comedy show. Leah has performed at San Francisco SketchFest, Del Close Marathon in NYC, Red Rocks Comedy Festival in Utah, and Las Vegas Comedy Festival. She’s trained extensively in improv at UCB, iO West, and Westside Comedy Theatre. She is an outspoken advocate for mental health, sexual consent, the legalization of marijuana, and female empowerment. We are so excited to feature her!