Hello, and welcome to WhoHaha’s Comedy Call Out Winter 2021! This is a quarterly announcement where we shout out a group of WhoHaha creators who have put in the work and made amazing comedy! Do you know one of these creators? Because you should! 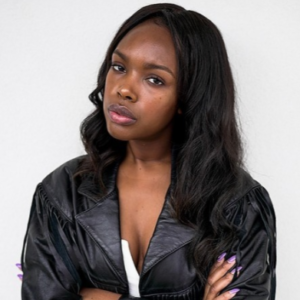 Jazmyn W is a true self-starting entrepreneur. As a Stand Up Comedian, Content Creator, Host, Actress & Influencer, her sense of humor is totally relatable and sometimes inappropriate. Jazmyn finds humor in awkward life moments, professional relationships, and microaggressions. She says what black women are thinking! With a reach of over 1.3 Million across TikTok and Instagram, she has made light out of the darkness that is the pandemic and politics. Listen to her podcast Colored Couch Conversations where she chats with women of color about women who inspire them, trending topics, and gives advice in the “Keep It Real” corner. Also, check her out on episode five of Amazon Prime’s Laugh After Dark. 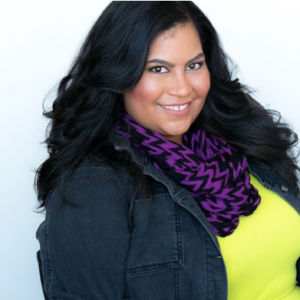 Danielle Perez is a Los Angeles-based comedian, actor, and writer. Her stand-out performance in the 2020 CBS Showcase led to a profile in The Los Angeles Times. A 2018 and 2019 StandUp NBC Semifinalist, Danielle is a comedy pro and has opened for Maria Bamford, Josh Gondelman, Guy Branum, and Cristela Alonzo as well as performing at Sundance Film Festival with Aida Rodriguez. Danielle’s personal and biting stand-up can be heard on Roxane Gay and Tressie McMillan Cottom’s podcast Hear To Slay. Danielle has been profiled by CNN, Refinery29, Great Big Story, Forbes, and in 2018 Los Angeles Magazine featured her as one of the 13 Powerful Women Who Are Making L.A. a Better Place. Not just a performer, Danielle is a disability rights advocate and advisor at Joey Soloway’s 5050by2020, an intersectional arm of the Time’s Up movement. In 2015 she became an internet sensation when a clip of her using a wheelchair, and winning a treadmill on The Price Is Right, went viral. She appeared as a guest on Jimmy Kimmel Live! for her hilarious reaction to winning the awkward prize. Danielle currently hosts Wow Rude, a weekly comedy podcast about pop culture, friendship, and being too much, with her bff and fellow comedian, Madison Shepard. If you haven’t heard the podcast yet, you are missing out! 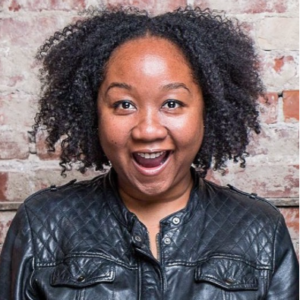 Coko Galore is a Toronto-based actor, comedian, and curator. She is one half of the dynamic improv comedy duo Coko & Daphney, Festival Director of Black and Funny – Toronto and Asian and Funny, and co-producer of The Untitled Black Sketch Project. Her performance credits include headlining festivals across North America (incl. Portland, Vancouver, Montreal & more), Harbourfront’s BRAVE Festival 2018 (also curated by Coko Galore), her solo show MIXED CHICK at the Toronto Fringe 2015, and most recently CBC’s Tallboyz. Coko Galore is currently Artistic and Managing Director of The Bad Dog Comedy Theatre, where she is instrumental in the creation of their YouTube Channel: Bad Dog Comedy TV. Personal Mandate: “As a creative leader, and as a Queer Black & Asian woman, I am committed to uplifting and elevating the marginalized voices in comedy. I am excited for how artistic spaces evolve as we move through these challenging times. Now’s the time for us to make bold choices and significant changes.” (2020) Photo Credit: Katherine Fogler. 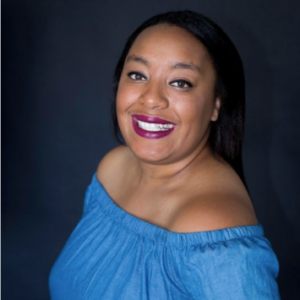 Vannessa Jackson is a stand-up comedian, host, writer, and entertainment expert. She currently works as a writer for Season 2 of A Little Late With Lilly Singh. She was also the Writing Apprentice for Season 4 of The Late Show with Stephen Colbert. Before making the leap to New York, she honed her writing and celebrity stalking skills as the E! Shows writer for E! television networks. She also developed her own satirical late-night style show onstage at Second City Hollywood called Vapid Thoughts with Vannessa Jackson. In the show, she delved into hard-hitting topics such as The Bachelorette and Kanye West’s marriage. She was also a Writer & Performer for Late Night with Jimmy Fallopian Tubes, LA’s only all-female written and produced late-night show at the Upright Citizens Brigade. While writing for A Little Late with Lilly Singh, Vannessa also hosts her own Instagram show, VMZ, where she dives into the social media pasts of her friends. If you don’t know Vannessa yet you should! 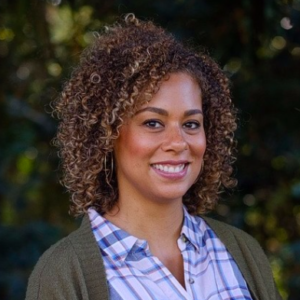 Carla Lee is a hilarious comedian, sketch writer, and producer. As part of her WOC/QPOC-led sketch project Nice Tan, she created a hysterical and educational improvised talk show, The Gordella Wallace Show. As impeccably coiffed host Gordella Wallace, Carla Lee uncovers the unfortunate realities of Black History Month for Bay Area artists while making her audience bust out laughing. She is passionate about spotlighting underrepresented voices in comedy and is thrilled to have had multiple sketches from Nice Tan featured on WhoHaha, as well as a recent holiday video from her other sketch group, Killing My Lobster. Nice Tan has successfully funded their series pilot, and Carla is eager to build collaborative relationships with the smart and hilarious women in the WhoHaha community as Nice Tan enters pre-production. It’s a critical time for marginalized creatives to lift each other up, and Carla hopes the success of Nice Tan will inspire her colleagues to keep hustling on their own projects and get them out into the world! We are obsessed with Carla Lee and know you will be too! 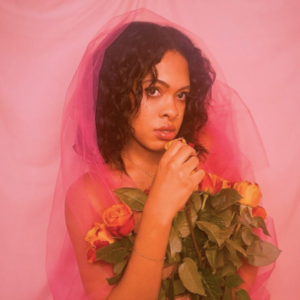 Camille Corbett is an amazing writer, Atlanta native, and a queer-identifying, first-generation Jamaican-American. She is a graduate of the University of Alabama and a Fulbright Scholar. She was raised by her Immigrant mother and her Southern father who is a former NFL player turned motivational speaker. Camille has traveled to over 18 countries and can speak 3 languages (English, Spanish, Turkish). As part of her Fulbright Grant, Camille spent a year teaching English at Abant Izzet University in a small town in Turkey. Camille just wrapped as a Staff Writer on the upcoming Jamie Foxx series, Dad, Stop Embarrassing Me, for Netflix. In addition, she has recently written episodes for the Quibi series BREF produced by DreamCrew. Previously, She was the TA for the NBC writing fellowship: Writers on the Verge as well as Writers’ Assistant on On My Block. Prior to that, she was a Researcher for The Hotel Theresa film, Born to Fail, a TV show in development at Gunpowder & Sky, and The Terror for AMC. We think Camille is great and know you will too! 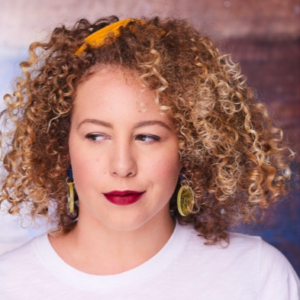 Anastasia Washington is a Bi-racial actress, writer, singer, comedian, and filmmaker. She has enjoyed a career that includes movies like, The Addams Family Series, Die Hard 2, and television series like La Femme Nikkita, Lamb Chop, and Pickett Fences. She also has recorded with Artist Michael Jackson and Harry Connick Jr., just to name a few. You can now find Anastasia making bold diverse content through writing and filmmaking, acting in both comedic and dramatic roles, and singing her heart out for you. She’s still making Comedy in these strange times. Stand Up and Sketch even in Quarantine. Zoom shows. Deal with it. You can also listen to her on her various podcasts, Cereal Killer (True Crime and Cereal), Haunts and Hops ( Beer and Paranormal), High Realitea ( Weed, Tea and Reality TV), You Can’t do that anymore ( Movies) , and Histerical (History). Anastasia has the privilege to be a member of SAG/AFTRA, WIF, and WOC Unite. She also has her one-woman show coming out Virtually titled, 50 Shades of Mixed: Confessions of your ethnically ambiguous best friend out now at the Whitefire Theater! Anastasia is amazing and we know you’ll love her! 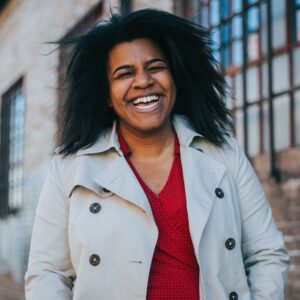 Who is Lexie Grace? Imagine Rose of Golden Girls and Billy Wilder had a lovechild who was magically a Black Puerto Rican comedian. Lexie Grace is smiley, relentlessly optimistic, big-hearted, and funny as all h*ck. Raised in Hollywood by a literal pack of wild female comedians, Lexie is used to being the odd one out: too Black for private school and too nerdy to not get beat up at Sunday School. Lexie has smiled through it all while making everyone else laugh along the way. Lexie’s wide-eyed enthusiasm and lovingly earnest nature make her stick out in our rat-eat-rat world, while landing her in some bizarre and madcap situations with individuals of questionable morals… but she’s happy to tell you the tales of how she survived. These stories of escaping familial stalkers, combating racist attacks with sheer positivity, and family hijinks have regaled audiences from the Big Pine, Out of Bounds, Gilda’s LaughFest, Noho Comedy Festival, and Dallas Comedy Festival to the Laugh Riot Grrrl Festival. She has also studied writing and directing at NYU, trained at Groundlings, Second City Hollywood, UCB, and just wrote a commercial for IKEA. Check out Lexie Grace’s comedy, and you’ll see why audiences everywhere are so enamored and entertained. 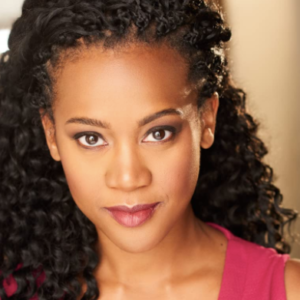 Aydrea Walden originally started her career as a reporter who uncovered one of the largest drug busts in Washington State and stood next to one of the most notorious serial killers in the country while trying to avoid eye contact and praying he didn’t come for her. Eventually, she learned she could still write crazy stories, but without the life-threatening situations, so she started writing scripts instead of scandalous local news. Aydrea is currently a Writer for Disney Jr., and has also written on animated shows for Nickelodeon, Disney, Amazon, and Mattel. While working with Mattel, she wrote the viral short Barbie and Nikki Discuss Racism, for the Barbie Vlog. Aydrea is also the creator and star of the critically acclaimed Black Girl in a Big Dress digital series. The web series features an awkward African American Anglophile trying to navigate the 21st century dating with 19th-century ideals. Let’s just say if you are a fan of Bridgerton, you are going to BURN for this show! If you aren’t obsessed with Aydrea Walden, you will be soon! 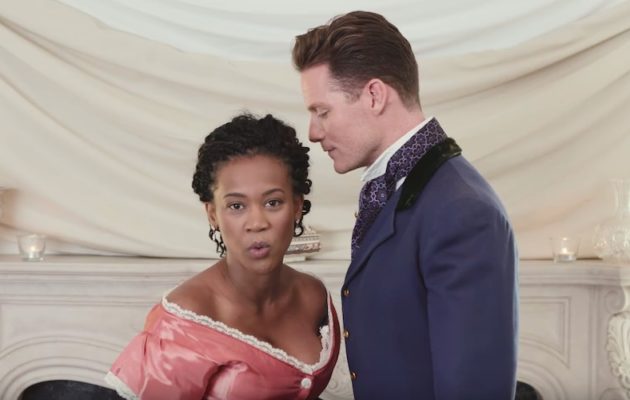