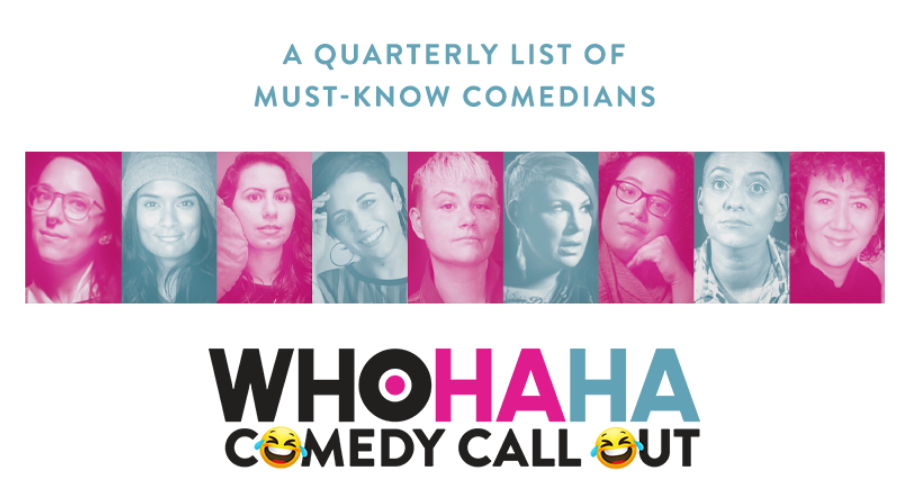 Hello, and welcome to WhoHaha’s Comedy Call Out Summer 2021! This is a quarterly announcement where we shout out a group of WhoHaha creators who have put in the work and made amazing comedy! Do you know one of these creators? Because you should! 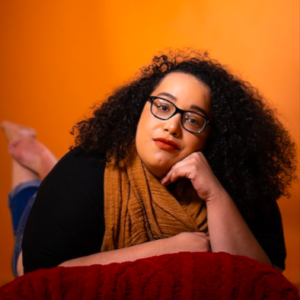 Palmira Muniz is a fat, queer, Afro-boricua from The Bronx, but also raised in SoCal. Now living in Los Angeles, the UC Davis graduate works within the entertainment industry, while also working as a writer, stand-up comedian, content creator, sensitivity consultant, and script reader. Palmira is also a producer, writer, and performer for Latinsh.TV and created & starred in the well-received short, Choice [The ANTI ANTI choice film] and was featured in the Freeform Pride 2021 Campaign. After spending a lifetime writing and many years studying film and theatre, Palmira ultimately hopes to become a critically acclaimed show-runner and create media that resonates with communities of color, especially other fat Black and Latinx women. We think  Palmira is awesome and know you will too! 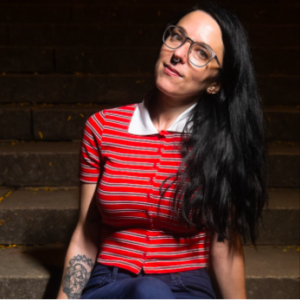 Caitlin Reese is a Brooklyn-based comedian and writer not pulling any punches about her mental health, disabilities, or chronic gay condition. She once published and sold out a comedy zine through Tower Records by accident. Notably, Caitlin was a Finalist on Amazon Prime’s Comics Watching Comics where a couch of judgy judges laughed really hard at her jokes and couldn’t come up with anything but nice things to say. Her album will be released on Helium Comedy Records this year, and she was featured on their Best of Helium Records Volume 2 on Spotify. She has been published in The Onion and has a queer comedy podcast called Straight Guys. She regularly performs at New York Comedy Club and has been in a million festivals including the HBO Women in Comedy Fest, Limestone, & Laughing Skull. She once opened for Kevin McDonald from Kids in the Hall, and he followed her backstage to compliment her performance while he was supposed to be on stage. In her former life, she was a social worker and ran a rape crisis center until they fired her after a video circulated of her stand-up. The premise of the joke was about feeling terrible for unsubscribing to amber alerts. Stand-up jokes are not meant to be told in boardrooms. She also used to do undercover animal rights investigations, which was likely due to the guilt of putting her childhood cat in bonnets. Caitlin is hilarious and you should all follow her! 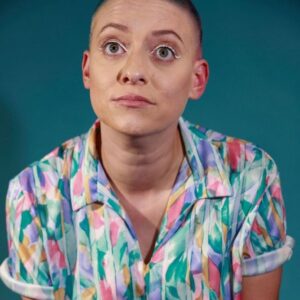 Sammy Mowrey is a comedian and writer in Los Angeles. Most recently they have appeared on Adult Swim as well as The Drop Comedy Club, Midwest Queer Comedy Festival, and Albuquerque Funny Fiesta. Amidst the pandemic, Sammy has been accepted to the North Carolina Comedy Fest 2021, and Burning Bridges Comedy Fest 2020. Sammy also co-hosts Femmes the Rules, a monthly stand-up show where men and women are paired together and during the man’s set, the woman is allowed to interrupt him, dole out strikes and enforce rules. Then the woman gets to do her set uninterrupted (as God intended.) It’s all in good fun! Sammy also creates videos and hosts character-based shows centered around Judy Salami, a manic and well-meaning civil servant. In live shows, Judy Salami brings her friends and experts together to tackle “The REAL issues.” Think if Leslie Knope bonked her head and forgot how to use words in the right order. Sammy’s Tweets have been featured on Buzzfeed, College Humor, and in angry men’s rants. Sammy has also been featured on the podcasts The Dork Forrest with Jackie Kashian, Too Sensitive For Comedy, and 12 Questions. They are also quite active on TikTok and make front-facing Twitter videos. Sammy’s Tikok is @mowrey_mowrey so be sure to follow them! 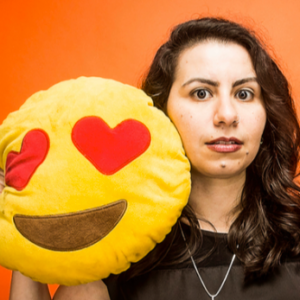 Dalia Malek is a California-based comedian who started stand-up in London, England where she honed her material at major clubs, theaters, and festivals. She has since performed all over the US, Canada, Scotland, Ireland, and Egypt where her family is from, including Egypt’s first-ever Cairo Comedy Festival. She also appeared in Second City’s Diversity in Comedy Festival, SF Sketchfest, Live Nation’s Latitude Festival in England, the Edinburgh Fringe Festival in Scotland, and Live Nation’s Electric Picnic in Ireland. She is the creator, producer, and resident host of festival favorite Interruption Show, a live show where she brings rotating co-hosts to join her on stage and interrupt comedians mid-performance to ask questions and dig for backstories about jokes. She also hosts and produces her show Ground Floor and co-produces Comedy in English in LA. Her media-acclaimed Twitter is frequently featured in lists and round-ups and she was named one of USA Today’s Young Feminists You Should Be Following on Twitter and Bustle’s Feminist Twitter Accounts to Follow. We think Dalia is awesome and know you will too! 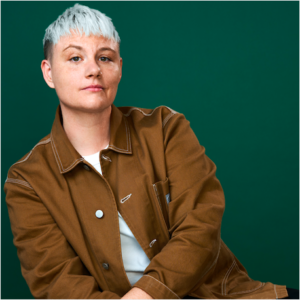 Ever Mainard is an award-winning comedian and actor!  Ever’s spontaneous characters, quick-witted anecdotes, and quirky mannerisms will have you laughing well after their performance. Variety Magazine hails Ever as a  “…Wildcard and Hysterically Funny…” Their background in improv gives them the ability to create visceral and borderline cathartic moments in their crowd work and off-the-cuff riffs. Ever is the voice of the Whisperer in The Mysterious Benedict Society (Disney +), and can be seen in Conan O Brien’s Meet The Staff, as well as Netflix’s The Feels, and Paddelton. Ever has been featured in Vogue and their viral, heavily improvised bit Here’s Your Rape is featured in many University feminist courses as well as in Roxanne Gay’s, Bad Feminist. Ever’s Edinburgh Fringe Festival, Let Me Be Your Main Main, touted many five-star reviews and was chosen as one of the top three US Imports to see at the fringe. Ever also isn’t shy when it comes to raising their voice for social change- they use their organizational skill and talent to co-produce (w/ Lindsay Adams) I Stand With Planned– a night of fundraising for Planned Parenthood and organizations that help women. We think Ever is amazing and so will you! 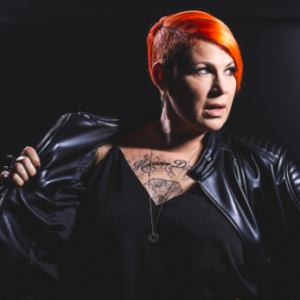 Melanie Vesey is an accomplished comedian, actress, writer/director, and owner of Promotional Rescue. Her comedy special/album Wild Animal is available to watch on Amazon, and to listen to on all major streaming platforms. She hosts the Promotional Rescue Talk Show where she has real conversations with people about how they deal with self-promotion. Throughout Melanie’s career, she’s been seen in the New York Times, The New Yorker, Paper Magazine, Playboy, Time Out, and Vanity Fair. In addition to her TV comedy spot on Laugh After Dark for Amazon, she’s opened for Marc Maron, Tweeted for Tig Notaro, WON round 4 of the U.S. Comedy Contest, and has been comedian of the week on the Jackie Kashian & Laurie Kilmartin podcast. Melanie also has a wealth of actor training having studied at The Julliard School at Lincoln Center, Stella Adler Conservatory in New York, and The Interlochen Arts Academy. You can see her exhibit her amazing acting co-starring with Jim Carrey in the Andy Kaufman biopic, Man on the Moon.  In 1999 Melanie faced one of the greatest challenges of her life when she was shot by her ex-girlfriend, a New York City police officer. In her own way of processing the traumatic experience, she wrote and produced a one-woman show, Bullets Bounce Off. If you aren’t in love with Melanie yet we know you will be, we sure are! 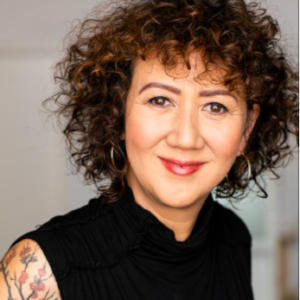 Suwon Weaver designed sweatpants walked on hot coals for fun. She grew up in Los Angeles with a Korean Mom and Black Dad, who was a proud WWII vet. As a kid, she spent countless hours watching reruns of I Love Lucy and The Bob Newhart Show, where she developed both a silly and dry sense of humor that landed her in the Principal’s office for being a 10yr old “smart-mouth”. Other comedy influences are Bill Hicks, Lily Thomlin, and comedy crush Tig Notaro. She’s the producer of the Hot Medusa Comedy Show and has performed all over LA, Texas, Utah and for ex-pats in South Korea. In her spare time, she volunteers to fight Parkinson’s Disease and teaches gentle yoga to her Mom. We know you all will adore Suwon as much as we do! 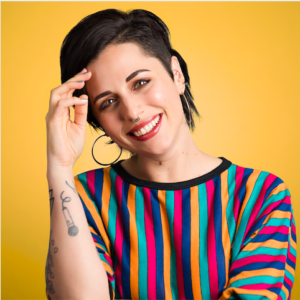 Danielle Arce is a comedian residing in California, originally from Phoenix, Arizona. Danielle began performing stand-up comedy in 2011 in Scottsdale, Arizona and has since performed and headlined all over the world – In the US, Japan, and Australia. She has also performed for the US Navy and Marines in Yokosuka and Camp Fuji. She headlines and features regularly on the road. She will be featured on ABC’s To Tell The Truth in Fall 2021. She has performed for comedy festivals including Bird City Comedy Festival in Phoenix, and She-Devil Comedy Festival in NYC.  She has been featured and interviewed for VoyageLA Magazine, ShoutOutLA Magazine, & Comedy Network Live. She has also been recognized for her work with fellow comedian, Nick Larson, including their sketch comedy work and podcast, “Secret Minorities,” which is on Libsyn, Apple Podcasts, Spotify, Google Play, & more. Her witty and sincere comedy is guaranteed to please. She’s hard-hitting, real, vulnerable, and relatable, and an overall goof. Danielle is fantastic and we know you will love her! 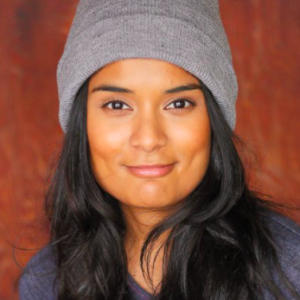 Christine Medrano is a stand-up comic, actress, and writer, from Winnipeg Manitoba, Canada. Her short film, I Think She Likes You, which she stars and co-wrote was programmed at the 2019 Tribeca Film Festival, Outfest, Frameline, and numerous other festivals around the world. She has appeared on HBO, Epix, the Eric Andre show, Good Mythical Morning, Amazon Prime, College Humor, Funny or Die, and Comedy Central. We think Christine is the best and know you will too! 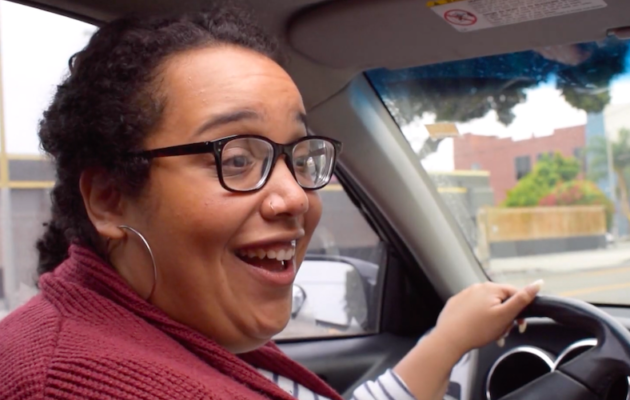